I recently attended a panel at the CORE:Club with Judy Rifka, where I’d curated the fall exhibition. I’d never met Rifka before nor seen her speak but now that I have, I will never forget her captivating candid presence.

If you don’t yet know Rifka’s work, she is an historically relevant painter, video artist, sculptor and print maker who rose in the New York Colab and Fluxus scenes in the 1970s and ‘80s with resume highlights including two Whitney Biennials, Documenta 7, and the 1980 Times Square Art Show.  In reading up on her in prior interviews I found it personally interesting that some of her abstract painting compositions were actually inspired by translational dance movements as she herself was studying dance. In the Fluxus period there were several artists combining ideas of dance and sculpture like Simone Forti but I hadn’t known of as many artists conceptually translating dance movement to painting.

When Rifka spoke, I felt like I was being taken on an unapologetic beeline journey into her psyche that gave me a loving slap when I arrived and left me wanting to come back for more. Around Judy, I knew I was in the presence of greatness.

The panel celebrated the release of the book, 50 Contemporary Women Artists, a volume comprising a refined selection of current and impactful artists in which Rifka is included. I admire the research conducted by John Gosslee and Heather Zises to compile the book. The foreword is by Elizabeth Sackler of the Brooklyn Museum’s Sackler Cernter for Feminist Art. Additional names in the book include sculptor and carver Barbara Segal and mixed media artist Stephanie Hirsch (selected artists on the CORE:Club panel), as well as Judy Chicago, and Teresita Fernandez, the first Latina woman to be appointed to the U.S. Commission of Fine Arts (an appointment decided by President Obama in 2011).

A solo exhibition of Rifka’s 1980s History of Sculpture acrylic abstract paintings was on view in an adjoining gallery space to the panel. The show is called Ionic Ironic: Mythos from the ‘80s presented by CORE:Club and LatchKey Gallery with support from Gregory de la Haba and will remain on view until March 29, 2019.

To kick off the evening, one of the first things Rifka said on the panel, when asked about the status of feminist art was, “I don’t know if there is such a thing as feminist art, but I believe that surviving being a woman and continuing to make art is feminist.”

In the following interview, Alexandra Goldman (Artifactoid) sits down with Rifka to continue to dig deeper into her ideas about gender dynamics in the art world in 2019.

Alexandra Goldman: What do you see as the main problem today of gender inequality in the art world?

Judy Rifka: The main problem is that everyone is left out, not just women. But that is, of course based on a general qualification on museums and galleries, and auction values. If you want to change the definition of what “is” is, to perhaps, networking posts in toto, it would democratize.

AG: What is something about gender dynamics in the art world that you see clearly only through your own experience?

JR: My own experience is that leaving female artists out , or treating them shabbily ruins the aggregate of visible art, and its historical and theoretical study.

AG: At the Core Club panel, you began to speak about an idea you had for a redistribution of funds: that when a work by a male artist sells for, as you humorously put it, “godzillions” of dollars, that a few of those godzillions should be allocated to a fund that supports development for women artists. Can you expand on this idea and how you see it playing out?

JR: If you have any interest or knowledge of John Rawls, A Theory of Justice (1971), “He is widely considered the most important political philosopher of the 20th century),” according to the Encyclopedia Brittanica.

You can understand a guiding principal that has at times been applied to even up the inequities in inclusion of people of color into numerous spheres.  It helped kickstart the elimination of a longtime series of inequalities in the playing field, which had seriously hindered their furthering of themselves to inclusion in our economy. That is affirmative action: a no-nonsense, this starts here, corrective.

I can see no reason, now that statistics bear us out, why women’s inclusion into a lopsided world of art pricing cannot then be facilitated, by redistributing a portion of those huge profits to women’s art institutions, and projects. It is not appropriate to simply shrug off these inequalities.

AG:  Have you thought of any additional, unique ideas for leveling the playing field?

AG: It’s known you’re interested in social media for sharing your artwork and studio practice. Are there some specific ways in which you’ve thought of utilizing social media to accomplish goals of furthering gender equity in the art world, apart from how they’re already helping democratize through the possibility of self-representation and heightened visibility?

JR: You have said it.  How bout considering the aggregate of Social Media, or even Internet in general, as the art form itself.

AG:  Is there something you think that young artists (they don’t necessarily have to be women) today should know, that you wish you had known when you were starting out, that may be able to somehow benefit the future of the art world?

JR: What is the art world? Needs definition, a new one.

AG: How do you think the art world should be defined?

JR: Probably should say “art worlds“ at this point, any networking of art and its ideas, works, and practices.

AG: Will you add me as your Facebook friend? I love artwork by Louise Bourgeois. Her recent show at the MoMA was beautiful and you can see her sculptures in the permanent collection  at Dia: Beacon. Up to and following her death in 2010, her dark, sensuous surrealism (consciously or not) continues to influence a new generation of artists. While not always as heavy nor activist as Bourgeois in their subject matter, these artists each reference certain elements of her style in original ways. Here are four that are remarkable.

Rita Ponce de Leon‘s  (b. Lima, 1982) work comprises surreal drawings and sculptures that gain power from their delicate intimacy. She works with pen on ink, clay, and Papier-mâché among other media. Last year I saw her beautiful installation at Proyecto AMIL in Lima that showcased many of her techniques, including heated sculptures to hold in your hands and drawings directly on the wall that scaled from floor to ceiling in the ample exhibition salon. Ponce de Leon is represented by Galeria 80m2 Livia Benavides based in Lima, Peru.

Geng Xue‘s (b. China, 1983) visceral ceramics captivate the imagination and bring us closer to our humanness. Attuned to sensory experience, Geng Xue often incorporates elements such as sound into the works, as in the above pictured piece, “Oceans Roar.” Geng Xue also creates animations that bring the pieces to life. C.J. Chueca (b. Lima, 1977) grew up moving nomadically between Perú and México, where she frequently came into contact with homeless people, nursing home residents, and psychiatric patients. According to a 2016 exhibition essay on her work authored by critic Eleanor Heartney, these experiences “stoked a deep sympathy for the dispossessed” in Chueca. Chueca’s porcelain wall reliefs are portraits of homeless men and women from her memory, modeled after assemblages of found objects. 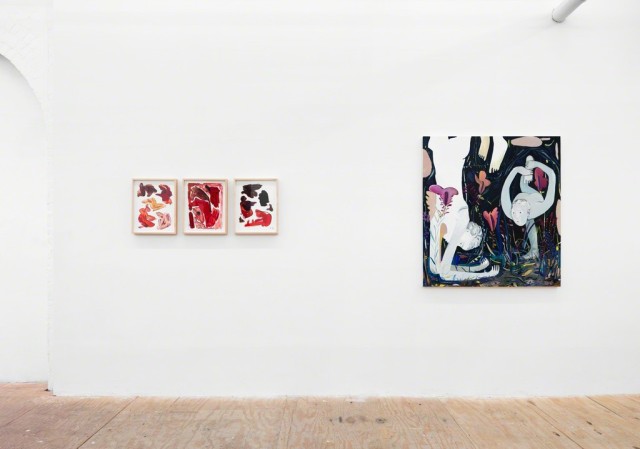 Jasmine Little (b. Virginia, 1984) is a technically gifted surrealist painter and sculptor whose works draw from emotion, memory and nostalgia rather than physicality. While most often related to Chagall or Matisse, there is something about the visual style and sensitivity of the pieces that recalls Bourgeois for me. Little is currently having a solo show, Hoodoos, at Johannes Vogt Gallery on the Lower East Side through April 28th, 2018.