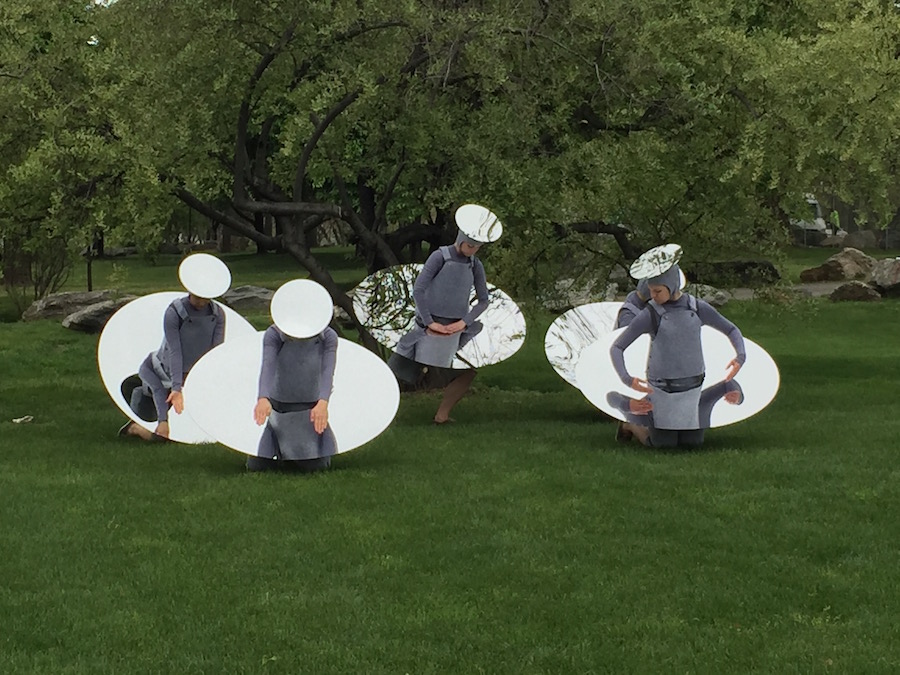 This year at Frieze New  York, a select handful of renowned artists executed unique live performances as a part of the fair’s special projects series. One of those artists was Eduardo Navarro, a talent I follow from Buenos Aires, Argentina. You may remember him from the article I wrote in January that explored his work with the Guagua Pichincha volcano in Ecuador.

Returning to work with natural forces, Navarro exhibited a piece at Frieze titled, “Instructions from the Sky,” which focused on the unpredictable movement of clouds. The meditative, eye-opening project featured a troop of dancers dressed in sculptural mirrored discs, enacting choreography that reflected the behavior of the sky floating above Randall’s Island during the fair. In this interview, Artifactoid sits down with Navarro to talk inspiration, vulnerability, and what he liked best at Frieze this year.

Artifactoid: What inspired you to create “Instructions from the Sky?”

EN: Reading a meteorology book my dad has, called, “Learning to Read Clouds.”

Artifactoid: Does “Instructions from the Sky” relate to any of the other great projects you’ve done that involve nature?

EN: Not really; this work is a mixture of different approaches I’ve had in other projects; it’s between sculpture and performance. It’s about connecting with something much larger than us and not having control.

Artifactoid: How did the way that the sky behaved during Frieze New York affect how these iterations of the performance turned out?

EN: Since the sky was telling us what to do, we had to adjust, and in many cases we were not able to go outside and perform. When it rained, we played and experimented with the reflections of the mirrors inside.

Artifactoid: What are some of the most important things that you learned from creating this project?

EN: It was great to delegate control, but it has a price; that price is anxiety. It was great to learn to not pay attention to the anxiety of the audience, and to feel free to improvise. I tricked myself into thinking it was always a rehearsal, and it was somehow.

Artifactoid: What are some of the key differences you’ve noticed between presenting a work at an art fair versus a gallery or museum?

EN: Well, for example, this project was perfect for a fair; if the weather was bad, people still had something to see!

Artifactoid: Aside from your own work of course, what were some highlights of Frieze New York 2016 for you?

EN: I completely fell in love with “Gabriel,” the donkey that performed for Maurizio Cattelan’s work.