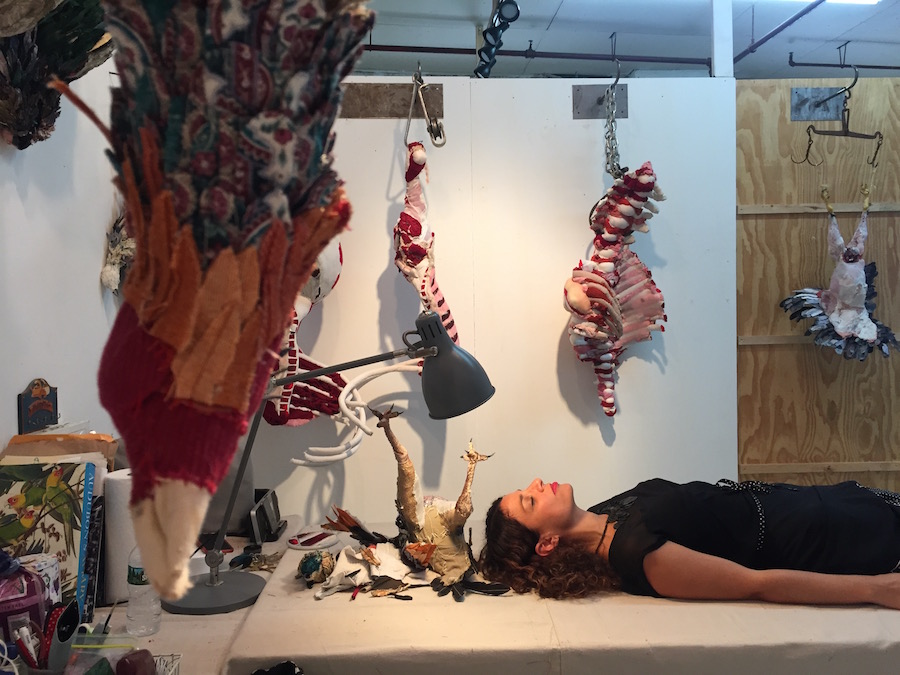 Born in Jerusalem and raised in Buenos Aires, Artist Tamara Kostianovsky was affected by the strong culture of animal consumption in Argentina during her upbringing so much so that it became a main focus of her artistic practice. During her youth, Kostianovsky became fixated on the ubiquity of animal carcasses around her city, and came to view them as tragic and sacrificial entities that possessed a certain melancholic beauty.

What’s more is that Kostianovsky’s experience surrounded by carnage from a young age didn’t stop at animals; her father was a plastic surgeon, and in a recent conversation, Kostainovsky explained to me that not only did she have a stint working at his office, but medical images of surgeries and dissected human body parts were commonplace in her childhood home, laying around casually, even on her kitchen table.

As an artist, Kostianovsky transitioned her career from focusing on painting to sculpture, and felt compelled to creatively work with her memories of the torn body and themes of consumption. Her 2014 collection of sculptures, “Actus Reus,” comprised a series of hanging “meat” and “animal carcasses,” which she would meticulously assemble using only her own discarded clothing (sometimes working around an armature).

Continuing to experiment with these themes, Kostianovsky began to diversify her subject matter when a friend of hers suggested that she begin to work with birds. Kostianovsky liked this idea, and she started experimenting with feathers, ordering them off of the Internet, studying them and replicating them with fabric using new techniques.

One day, she ordered what she thought were feathers online, but what arrived instead in the package was a full pheasant for taxidermy. She looked down at the deceased bird in the box, and thought that it shared this certain tragic beauty to it that she had always felt inspired to work with. This launched her 2016 collection of hanging dead bird sculptures titled “Relic,” which she recently exhibited as a part of a group show at Y Gallery called “Natural Resistance” that dealt with the tension between violence and nature.

To note, by working with nearly exclusively recycled clothing, towels and blankets to create works that highlight how we consume nature and animals, Kostianovsky continually makes a conscious and dynamic political statement of “anti-consumption.”

In the following interview, Artifactoid sits down with Kostianovsky to discuss her artwork’s connections to art history, the inspiration that arose from working with clothing and dead animals, and the artist’s current participation in the exhibition, “Weave Wars” at the Indianapolis Arts Center from September 23rd through November 19th, 2016.

Artifactoid: Many people have compared your sculpture work to imagery present in Flemish still life paintings. Was the connection intentional, and what is most important about its influence on your work in your opinion?

TK: The connection between my work and Art Historical Still Life paintings is intentional. For years, I’ve been enamored by the way Flemish artists were able to turn images of dead animals and flesh into complex mirages of luxury and excess. I’m drawn to the expressive and dramatic character of this imagery and seduced by the issue of wealth that these works present. In the 17th Century, owning one of these works was a strong status symbol. They perpetuated a “full plate” on the walls of a house, while reassuring noblemen of their class, as hunting was only reserved for the nobility at the time. 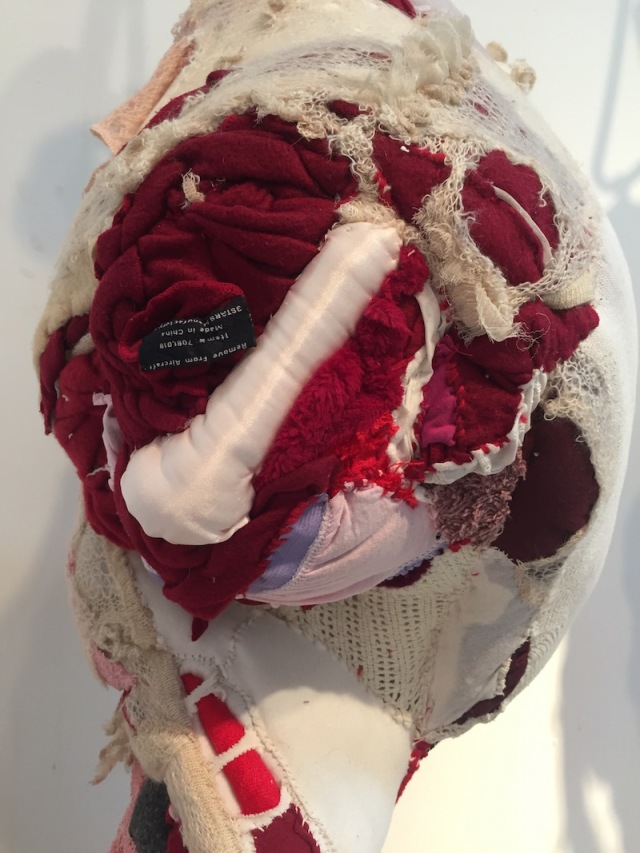 As for me, I’ve come to the world of flesh from a unique experience. While living in Argentina as a teenager, I worked at a surgeon’s office at the same time that I was going to art school. The transition between work and school became quite seamless and I was able to connect the sightings of blood, ligaments, and fat I saw at work with my early experiences as a young painter. Since then, I’ve been interested in looking at images of torn flesh from that perspective, so when I came across the Dutch Still Lives, I recognized that impulse to make the inside of the body appear luxurious and seductive, and I was transfixed…

Artifactoid: At a recent panel discussion at Y Gallery you mentioned the idea of links between a meat slaughterhouse and a fashion runway. Can you please expand on your ideas about this comparison and how it inspires you artistically to explore?

TK: In recent years, research for my work has made me take a close look at both slaughterhouses and the fashion world. On a first look we tend to see these systems as complete opposites: slaughterhouses hide the abject, the disgusting, and the cruel, while the fashion world is involved with beauty and perfection. In my view, strong resemblances between these two systems exist, particularly in the rhythmic, mechanical way that bodies circulate in choreographed way around a space, a topic that fascinates me because of its connection to sculpture, to architecture, and to our most primal experience of existing as physical beings in the world. Because of efficiency, optimization, and organization, direct connections can be established between the diverse systems that dominate the production of goods across different industries in today’s world. I am interested in making work that inhabits this intersection, artwork that on some level articulates the contemporary experience of consumption, industrialization, and that questions the modern ways in which we’ve become “modern predators.”

Artifactoid: Who are some of the other talented artists working with fabric who inspire or influence you?

TK: Discussing textile art can be conflictive. From a Latin American perspective, fiber has a rich, ancient tradition that speaks of nobility, community and a spirit of collaboration with the animals of the Andes. From a contemporary Latin American art point of view, fiber is often a material of choice that can successfully articulate with sensibility and humbleness some of the sociopolitical and economic problems of the region. Within a more international contemporary art perspective, textile art is often linked to “craftiness”, “softness”, and the “feminine”. I reject the notion that I make “soft sculpture”– there isn’t anything “soft” in what I intend to say or the way I say it. In using fabric, I see an opportunity to expand the scope of what this material can do, but most mostly an opportunity to redefine the gender notions that still haunt women artists.

I came to fabric through surgery, and because I use mostly my own clothing to make art, I see this material as a second skin, a surrogate of my own body. Janine Antoni has been a big referent for me in the way she used her body to activate sculptural processes. Louise Bourgeois comes to mind as well, but mostly because of a kinship to a dramatic sensibility, not so much because of the material choice.

Artifactoid: What are you most excited about regarding your participation in the “Weave Wars” exhibition?

TK: I’ve recently discovered the artwork of Ben Venom, whose work is featured alongside my own at the new exhibition “Weave Wars” that opened on September 23rd at the Indianapolis Art Center. I’m excited about his very alternative and badass quilts but mostly about having my work featured within an incredible group of artists who are thinking of ways of pushing the limits of fabric as material. Because I am a little fatigued of media-specific exhibitions, I tend to not participate in fiber-art shows, but this one seems to be energized, radical, and original. I’m excited about what curator Kyle Herrington has put together.

Tamara Kostianovsky was born in Jerusalem, Israel and raised in Buenos Aires, Argentina. She currently lives and works in Brooklyn. Her work has been widely exhibited internationally, as well as presented in solo and group shows at venues including: The Jewish Museum (NY, USA), El Museo del Barrio (NY, USA), Nevada Museum of Art (NV, USA), Socrates Sculpture Park (NY, USA), The Volta Show (NY, USA), Maison et Object (Paris, France), and the Urban Institute for Contemporary Arts (MI, USA). Kostianovsky is the recipient of several grants and awards, including: The John Simon Guggenheim Memorial Foundation Fellowship, The New York Foundation for the Arts Fellowship, two Pollock-Krasner Foundation Grants, and a grant from The Pennsylvania Council on the Arts.